BACK HISTORY: The Gable Faces East 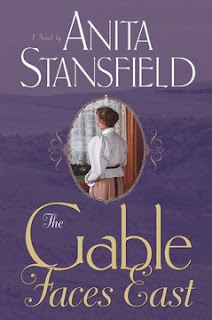 I came up with this title years before I came up with an idea for a story that fit. I just remember thinking that one day it would work, and it did. In fact, the title became so much a part of the story, that it was amazing to me. I wrote the book in 1988, long before I ever considered writing LDS fiction. Much later, when I had started writing my first LDS novel (see notes on First Love and Forever here on this blog) I just knew that Michael would be the descendent of these characters. But it was years later that this was published.

For my publisher, doing a book without LDS content was somewhat of an experiment, and after doing a handful of them, we mutually decided that it wasn’t working. I learned after the fact that they weren’t very clear within the company what their policy actually was on certain issues. I submitted the book with the belief that if there were aspects to the story they felt needed changing, I would work with them to do the changes. Long after it was published, it came to my attention that some readers (AND some people who worked for my publisher) were outraged at the content of this book. For me, I knew that in contrast to national market romances, it was squeaky clean, (and that’s what my goal was, to offer a positive alternative to such books) but for some people it was apparently extremely offensive. This was when I first met with the true meaning of hate mail, and I became well acquainted with what we unaffectionately call the self-appointed morality patrol. I recall receiving two letters on the same day: one was from a woman who told me I was writing pornography, the book should be burned, and I wasn’t worthy of a temple recommend. The other was from a mother thanking me for writing a clean historical romance that she could let her teenaged daughters read. It’s clearly all a matter of perspective, but the people who hated this book spoke very loudly and it began a downward cycle in policies, politics, and book sales.

Ironically, the book sold very well, and I’m still frequently told by many good women that this book is one of their favorites. If I had to go back and write it again, I might have been more careful in how some things were presented, but I would never change the story. I know that the intentions of my heart were to write a clean book that taught good messages. The publisher let the book go out of print because I believe it became somewhat of an embarrassment to them. But hey, it’s a great story and it's now available for the Kindle HERE.

I’ve often been asked: why Australia? The answer is: when the idea for this story came, it was in Australia. The characters are Australians; where else would they live? Can’t wait to tell you about the sequel, Gables Against the Sky!
Posted by Dina Love at 6:40 AM

This is one of my favorite books! Now that I have the complete series of Michael and Emily I always start here! Love Love Love these books!

Wow, I wouldn't have thought anything bad about the book. It's also one of my favorites. I love it.

One of the things that I love about all of Anita's books are that they can talk about things of a sensitive and intimate nature in a delicate but realistic way. I grew up reading these books and the truth is they did a great deal in teaching me what relationships should/shouldn't be like. Thanks for writing a clean book with good messages! Oh, and I'm sure glad I got a copy of this book before it went out of print!!!

I am so excited that this series is available digital now! This always has been my very favorite! I was sad when I looked for this series and found it was out of print. I will be downloading them tonight!!