BACK HISTORY: The Three Gifts of Christmas 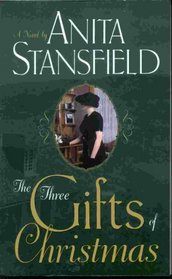 The Three Gifts of Christmas

Through the process of connecting the historical “Gables” novels and the contemporary “First Love” series, I realized there was a generation missing. After the success (and personal enjoyment) of the two previous smaller Christmas books, I decided to solve the problem by writing a Christmas story that would bridge the generations together. As with everything I write, it felt very inspired. I loved the idea of Allison coming home for Christmas, and the story being spurred by her conversations with her dying grandmother.

Since my father and my father-in-law both served in World War II, the era has a special place in my heart. In fact, my parents were newlyweds when my father was drafted, and I often thought of these characters and wondered how it might have been like for my parents. Looking at pictures of my mom and dad from these years certainly helped my inspiration along.

Part of the idea also came from hearing the fact that WW II fighter pilots had a life expectancy of six weeks once they were in action. (I think that’s the right number; I know it’s right in the book.) While that element intrigued me, I took what I knew of the previous and future generations in this family and pieced it all together. I also had the help of a wonderful woman I’d met who was Australian. She had read some of the previous manuscripts to help me make sure I was handling the Australian elements okay. She taught me about the Australian Christmas traditions and it was easy to tie those into the Hamilton family and the boys home.

I love to reread this book at Christmas time, and I love the way the scripture at the beginning takes on such powerful meaning with the things that LeNay learned during her early years at Byrnehouse-Davies and Hamilton. I love seeing Alexa as a grandmother figure; her wisdom and experience are powerful! I want to be that kind of grandmother some day.
Posted by Dina Love at 5:52 AM

I love reading these back histories. This is one of my most favorite Christmas stories. I just love reading about the traditions and more about the Hamilton family.