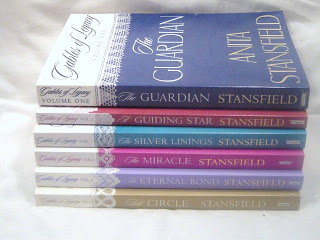 I had believed that this particular series was completed after five volumes, and then I moved on to other things. Much later, the idea came for this book and I realized that the story of Michael and Emily and their family was not yet completed. The title, “Full Circle,” came to me early on and felt very right for the theme of this story, and I was glad the publisher agreed to use it.

If you’ve followed Michael and Emily’s story from the beginning, then you know that they are kind of the Romeo and Juliet of LDS fiction—minus the tragic ending. The wonderful thing about the gospel, and writing stories with gospel-themes, is that we know the end of this life is not the end. When Michael passed away in volume three of this series, the story had shifted so that their children were the main focus of the plot-line, but obviously Emily remained a very strong character and well loved by readers. It occurred to me that Emily’s story could not really be over until she was reunited with Michael. Also, there was a point that had been made very strongly back in “Now and Forever,” that I felt needed follow-through at the end of the series. The point being that Michael and Emily were not able to be sealed in this life, because she was sealed to her first husband. Through some powerful spiritual experiences, Michael and Emily both came to know that they would be together forever, and the technicalities would be worked out when they got to the other side, but they made their children promise that once they were both gone, they would make certain that sealing was taken care of. Many of you have written to me over the years to ask if this is doctrinally correct, and the answer is yes. When we do temple work for those who are dead, a woman can be sealed to more than one man, so that the ordinance is in place, and the rest will get worked out on the other side. Once Emily had been gone for a year, this could happen. So, I’m giving away the ending if you haven’t read it: the culmination of this series was the sealing by proxy of Michael and Emily, and their children having a spiritual witness that they were indeed together. It’s the ultimate conclusion to a Mormon love story.

While getting Emily to that point, however, I needed some serious plot to get her through the final years of her life. I’ve written about romance in many seasons of life, but it was a new twist to have a widowed grandmother decide that she’s tired of being alone, she’s bored with her life, and she wants to start dating again. In a way that seems typical of real life, the adult children weren’t terribly thrilled with their mother trying to fill their father’s shoes. The story ended up having some great messages in that regard, and some real tenderness and romance. All in all, it has a great happy ending. And Anita Stansfield guarantees a happy ending.
Posted by Dina Love at 7:15 PM

Out of all of your books, this series was one of my ultimate favorites. I love each and every book of yours that I read. Michaels death was very hard for me... I had lost an uncle to cancer right before I read the book... and Emily's death was hard because well it's Emily. The Jana & Colin saga is hard for me to read being that I am a survivor of domestic violence & abuse. I love the dancing series... I snagged a quote from the very last one I believe it was a dance to remember... the quote about finding a gift in the trial. I always look forward to reading your stories... the characters go through some of the hardest things... but you bring the gospel & the atonement into it and it just helps to get through those things.