BACK HISTORY: By Love and Grace 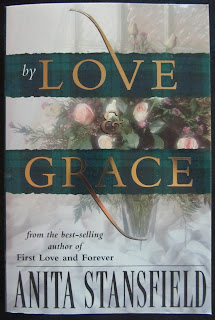 I actually wrote a good portion of "By Love and Grace" before I wrote “Now and Forever,” then out of the blue (another term for inspiration) I came up with the idea of having Sean O’Hara live with Michael and Emily so their lives could be integrated, and one story would lead into another. It worked out well in the long run with the way Sean kept showing up in the Hamilton Family Saga.

When the storyline first came to me, it was evident that having a heroine become the victim of a rape was a tumultuous and poignant conflict. Having it occur soon after meeting the hero brought up all kinds of irony and dilemma. With the story idea in place, I began researching this very sensitive topic, and pondering my own feelings on the matter. Having the hero a psychologist in training seemed another great irony, one that I can’t take credit for. (Inspiration again.) It felt completely right and natural that Tara would give this baby to someone else, which was a great opportunity to talk about the beautiful principle of adoption. Over the years, this book has been passed into many, many hands as they’ve dealt with rape, unwanted pregnancy, and/or adoption. It’s gratifying for me to see that it’s helped many people deal with real-life problems, even though for me it all stemmed from simply wanting to write a great story.

A year or so after this book was published, I met a man who became my own personal Sean O’Hara. He’s a remarkable psychologist who rose above his own challenging upbringing. Since that time we’ve become good friends and his insights have helped me a great deal in my own life as well as in my work. I take pride in being one of the people in his life that finally convinced him to write a book. (Because he’s so smart and has such great ideas.) It’s called “Everyday Parents Raising Great Kids,” by James D. MacArthur. Whether you’re raising kids or not, you should read this book!

I had barely finished this manuscript when I realized that I’d spoken to people who had been on both sides of adoption, but I hadn’t actually talked to a rape victim, and perhaps I should in order to be certain I’d gotten it right. I went to a book signing (during a BYU game; not smart) and not one customer came in . . . except for a young lady who had been raped and was pregnant, and working toward adoption. We talked and bonded. She read the manuscript and assured me that I had it right. (Must be inspiration.) This is one of many experiences that has let me know I’m being guided and directed in my work, which makes me very grateful, and humbled by the privilege.

Out of all of Anita Stansfield's book this one touched me the most and has always stuck with me. I think it's mainly because I read it right after I moved to Provo and had been date raped by a guy I had recently met there. I've read that book so many times in over a decade that my copy is falling apart. I feel so lucky to have gotten this book autographed by Anita before it started falling apart. There have been many times in my life that I've wished Sean was a real person so I could get his help. Especially recently when my life is more reflectant on Janna and Colin.